The women of Olney not only compete against each other but also against the women of Liberal, Kansas USA. It all started in 1950 from a magazine picture of the Olney women racing each other to the church. Liberal Jaycee President R.J. Leete contacted the Rev. Ronald Collin, Vicar of St. Peter and St. Paul’s church in Olney, challenging their women to a race against the women of Liberal. The Vicar replied, “The Race is on!”
The first race was held on 21st February 1950.
The record stands with 31 wins for Olney and 39 wins for Liberal (with 2 no contest; in 1980 the score didn’t count because a news van blocked the finish line in Olney).

You can check out our US friends’ website at: 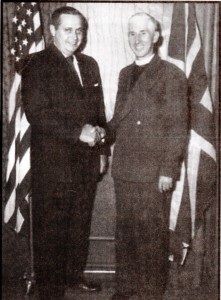