What an incredible Pancake Race day. On Monday the wind was howling and the rain was battering Olney. Fast forward to Tuesday and although cold, the sun shone on Olney for it’s annual Pancake Race Day. 25 runners and two special guests lined up at the start line, outside of the Olney Deli on the Market Place. Our two special guests were Isobel Ager-Righinioti, our 84 year young participant and Barney Harwood from BBC Blue Peter; dressed in a wig, with red lipstick and wearing an apron. The race was a lot of run with speedy runners like Lianne Fisher, Kaisa Larkas and Rachel Riding-Felce leading the race. Running for fun was Bethan Courtman and Wendy Dooley who ran three-legged. Also running three-legged were Dawn Bridge and Lindsay Pemberton. The Great Gappo and Isobel finished to huge applause.

Lianne Fisher finished in first place in a course record breaking time of 55:02. Kaisa Larkas and Rachel Riding-Felce finished second and third respectively. Becky Wemyss who smiled from start to finish finished in forth place. We had some strong runners this year, including a large Olney Runners contingent.

Not only did Lianne Fisher set a new course record, but she also beat Liberal’s fastest runner, Summer Parsons. Summer finished in 62:61, meaning Olney won the International Pancake competition for this year. 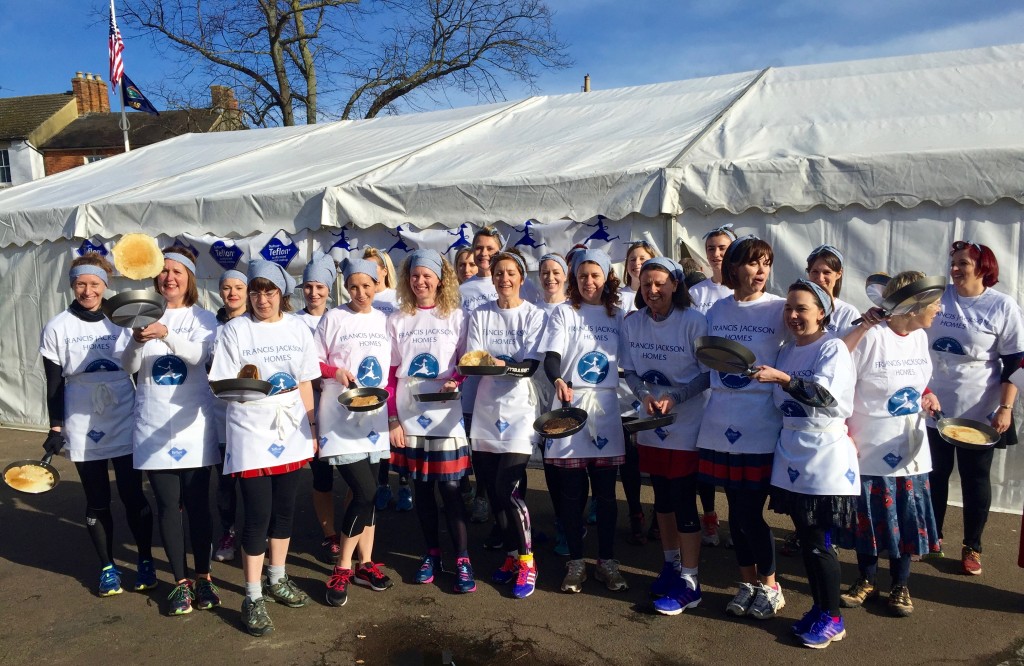 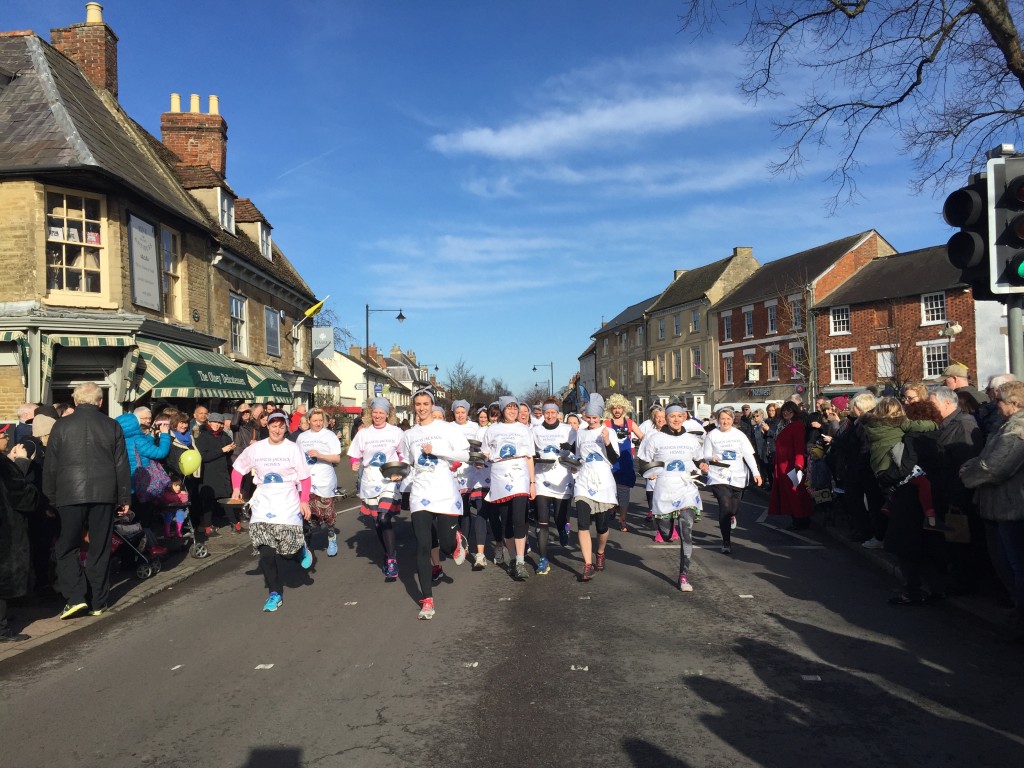 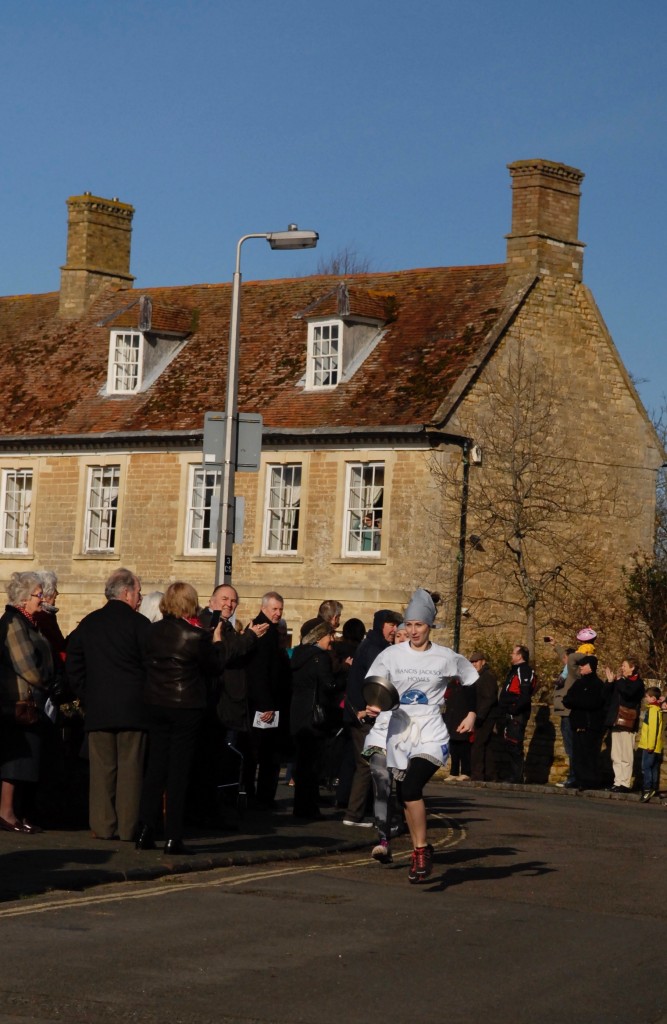 Leading the race Lianne Fisher and Kaisa Larkas (photo taken moments before Kaisa tumbled to the ground but gracefully recovered). 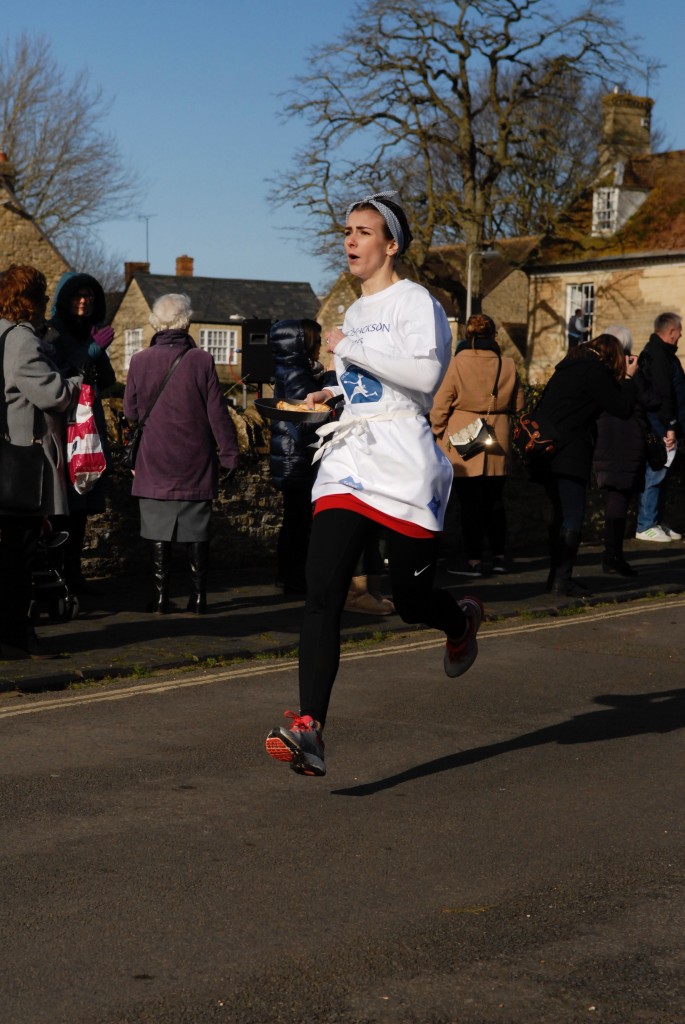 Coming in at pace in third place, Rachel Riding-Felce. 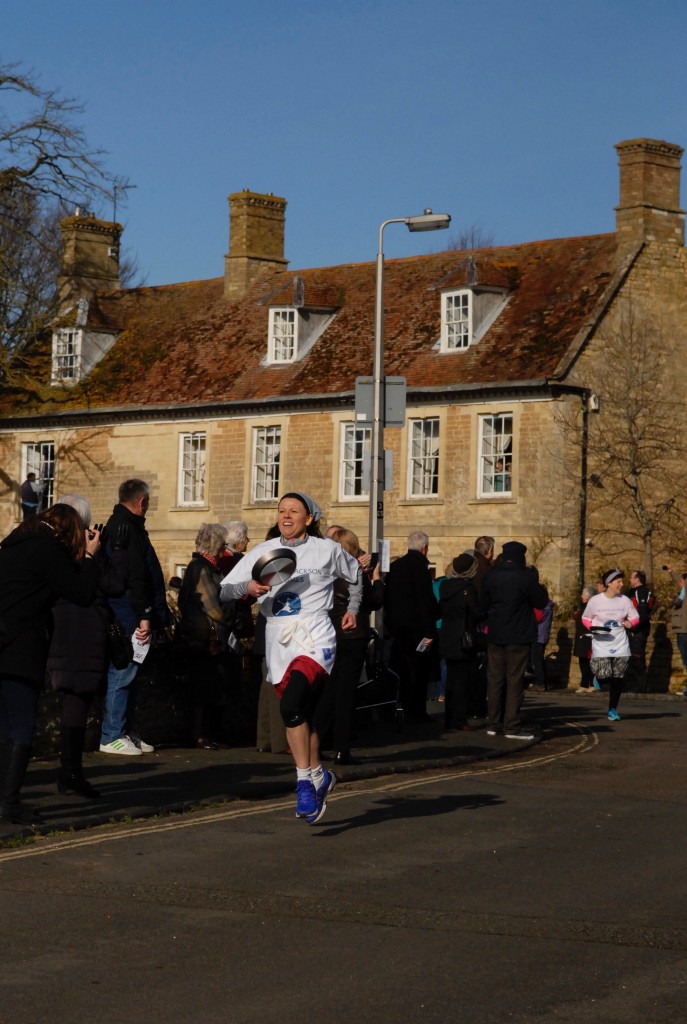 Forth placed Becky Wemyss smiling every second of the race. 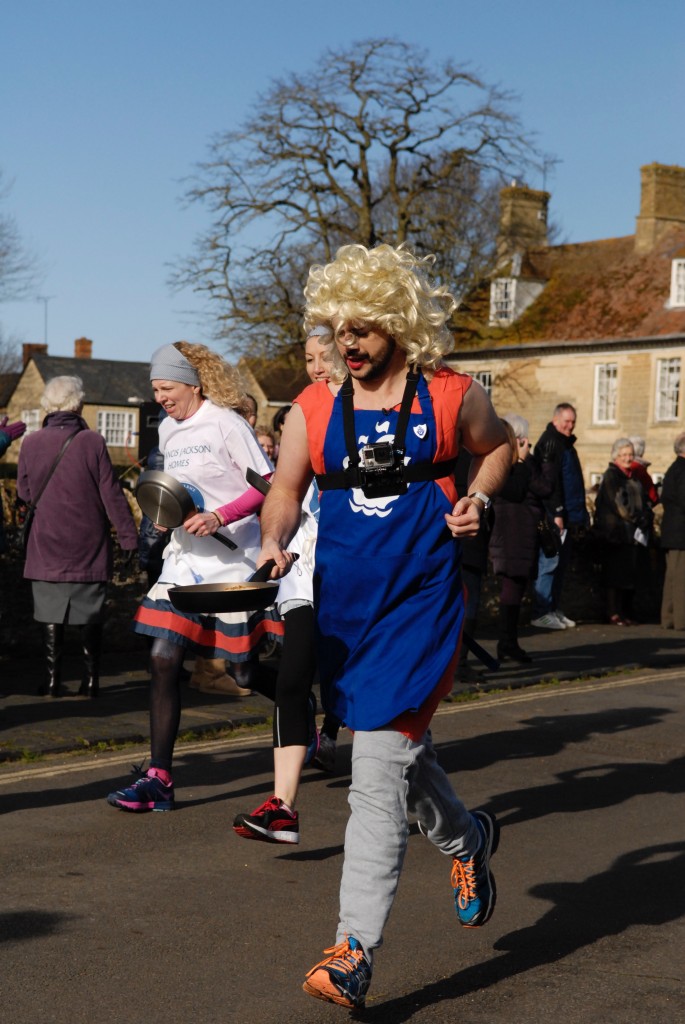 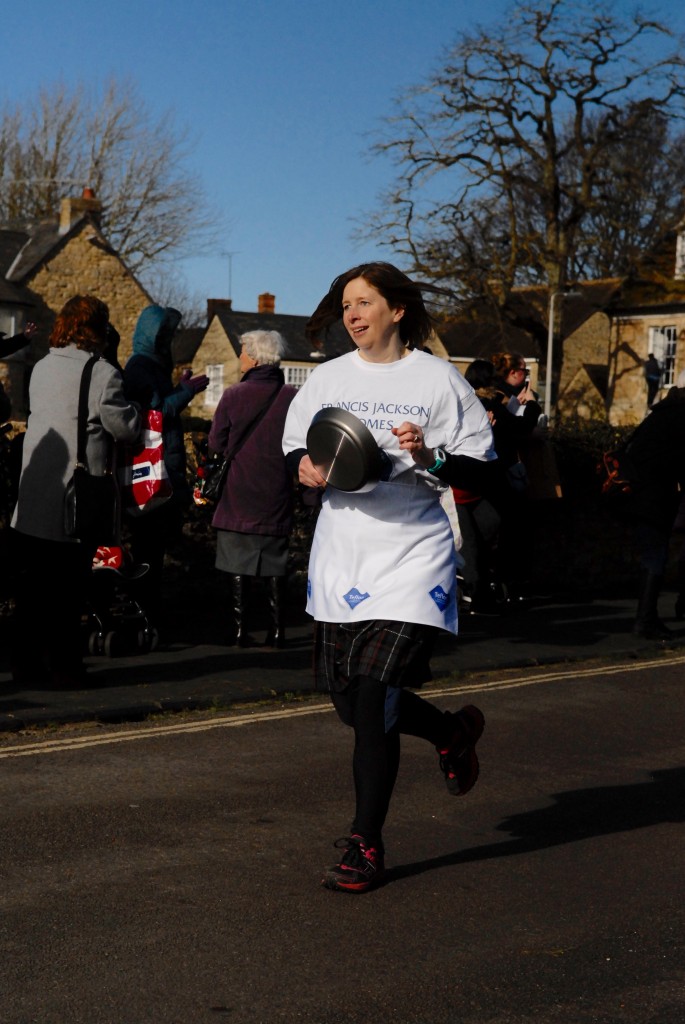 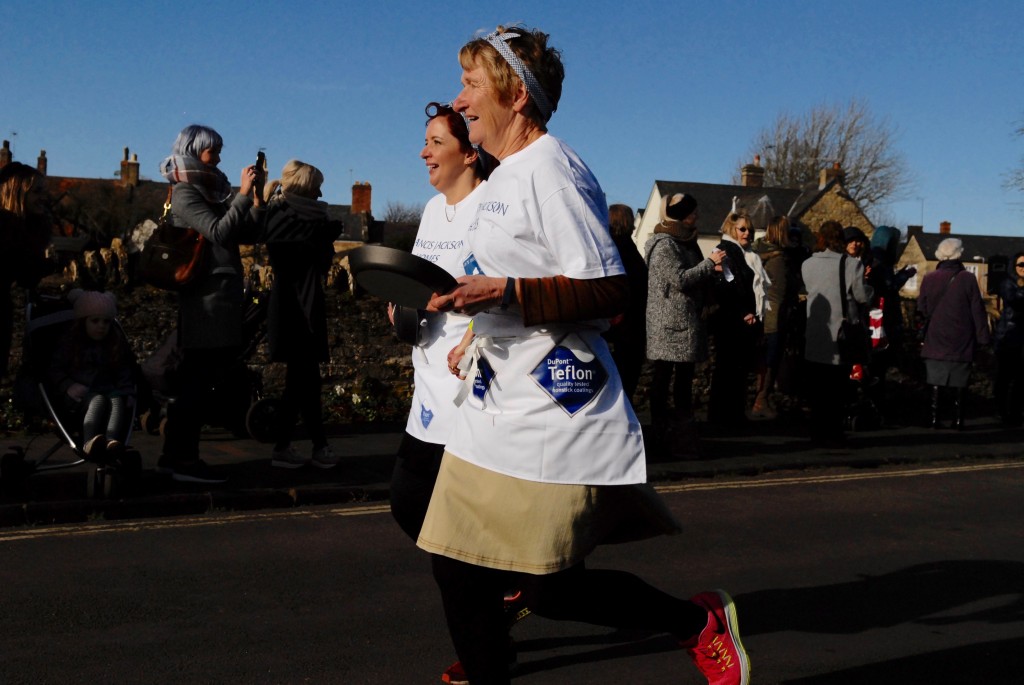 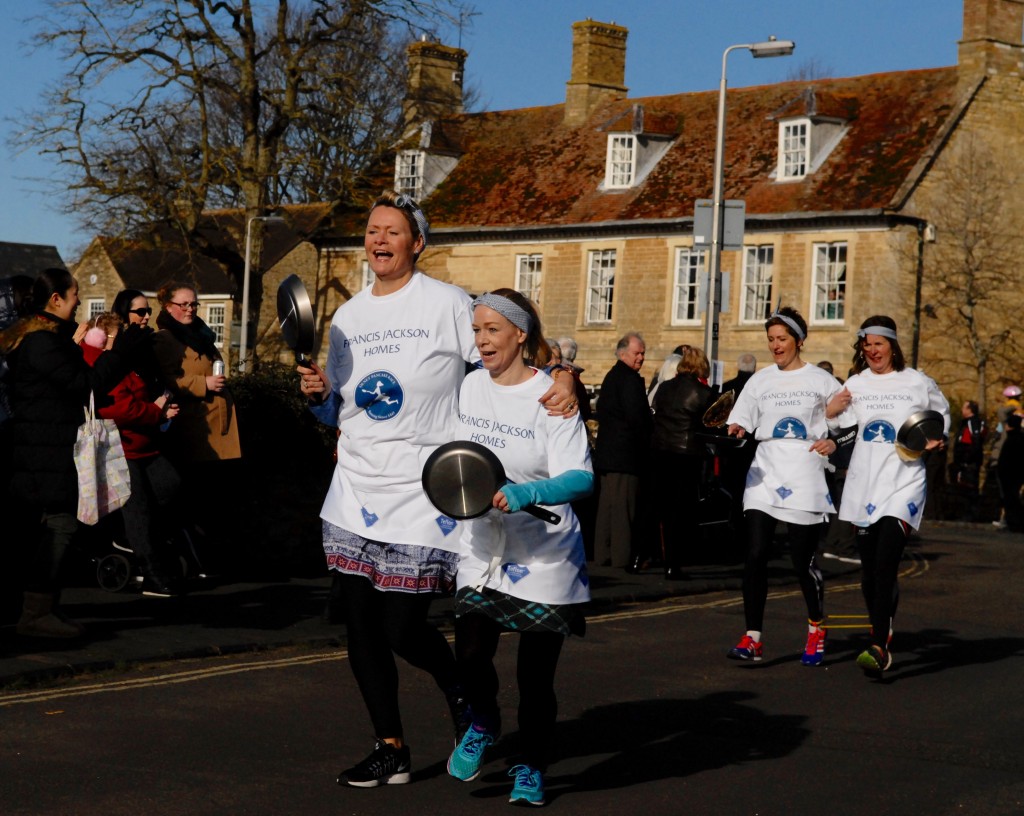 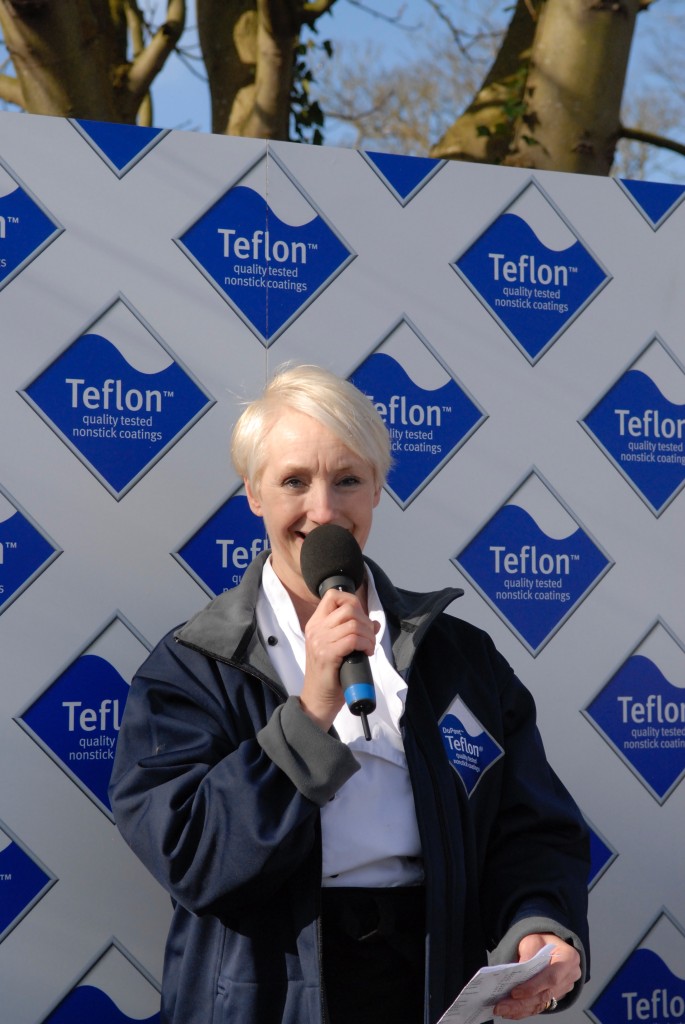 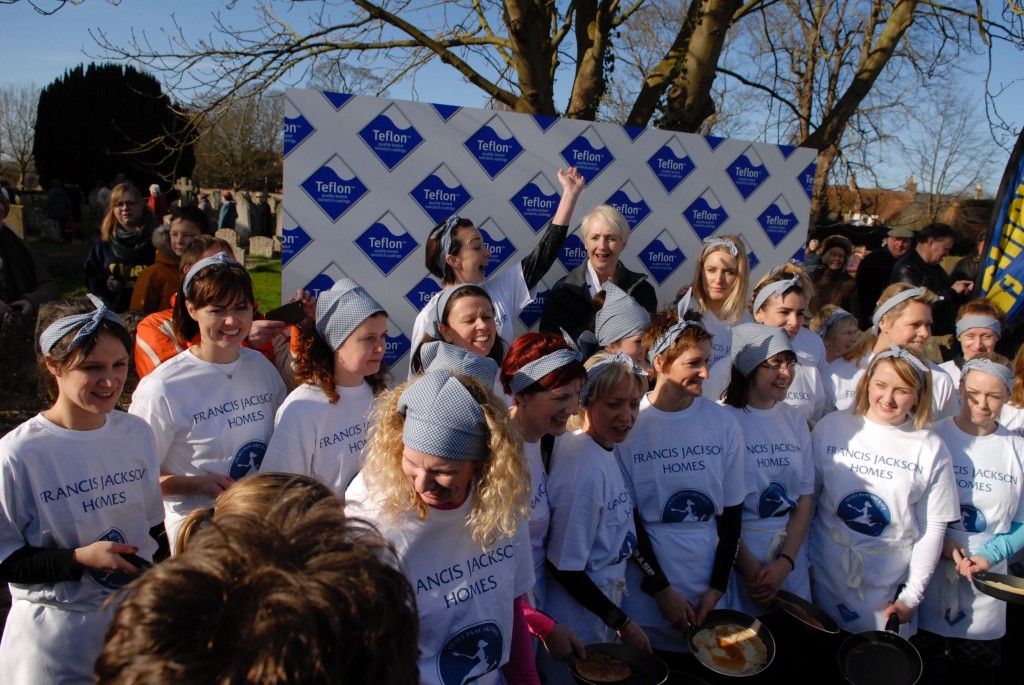 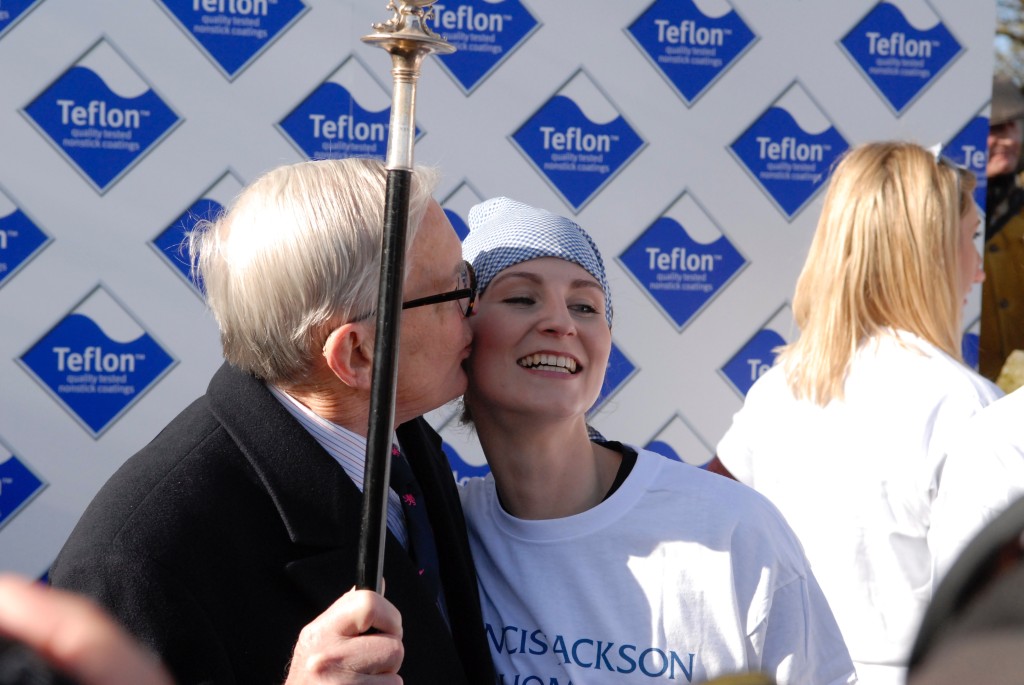 The winner getting a kiss from the verger is another Pancake Race tradition. 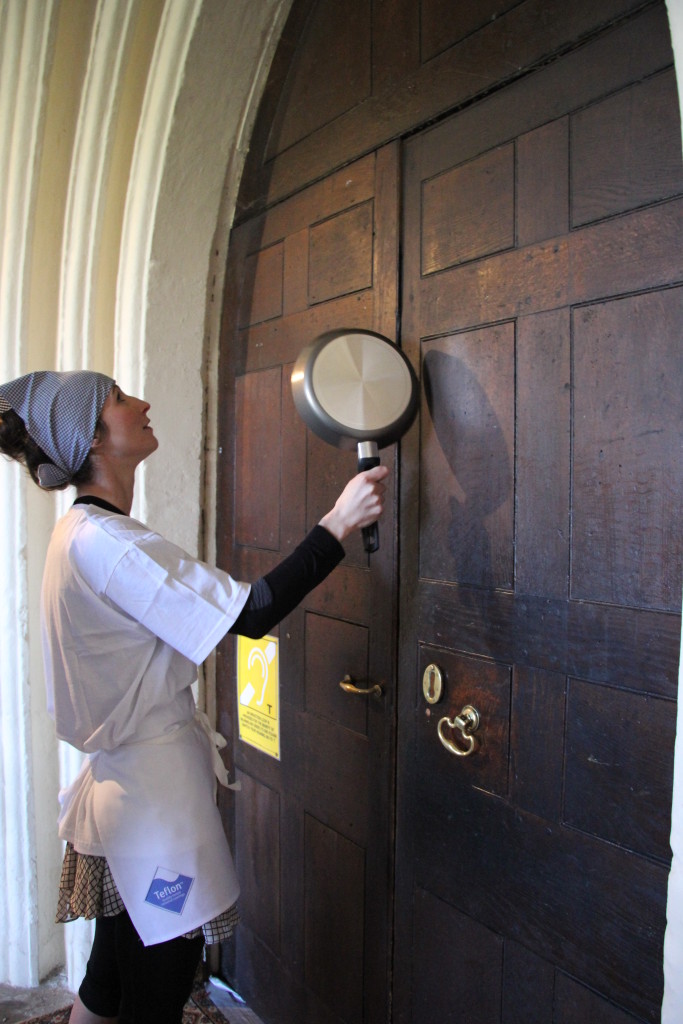 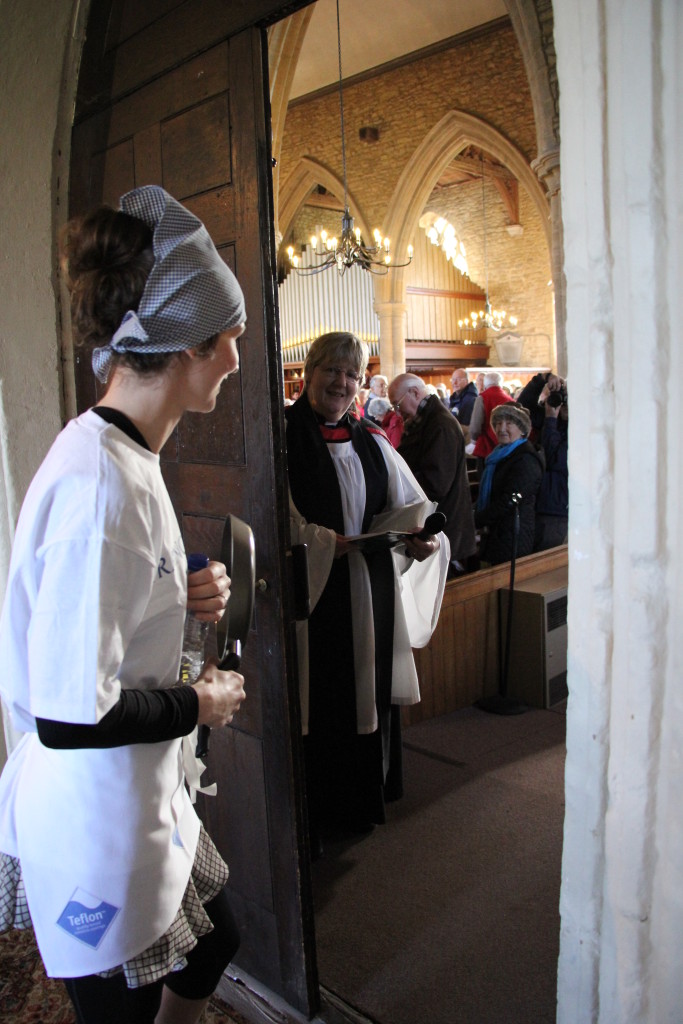 Leanne knocking on the Church doors and being greeted by Claire Wood the Rector of Olney. 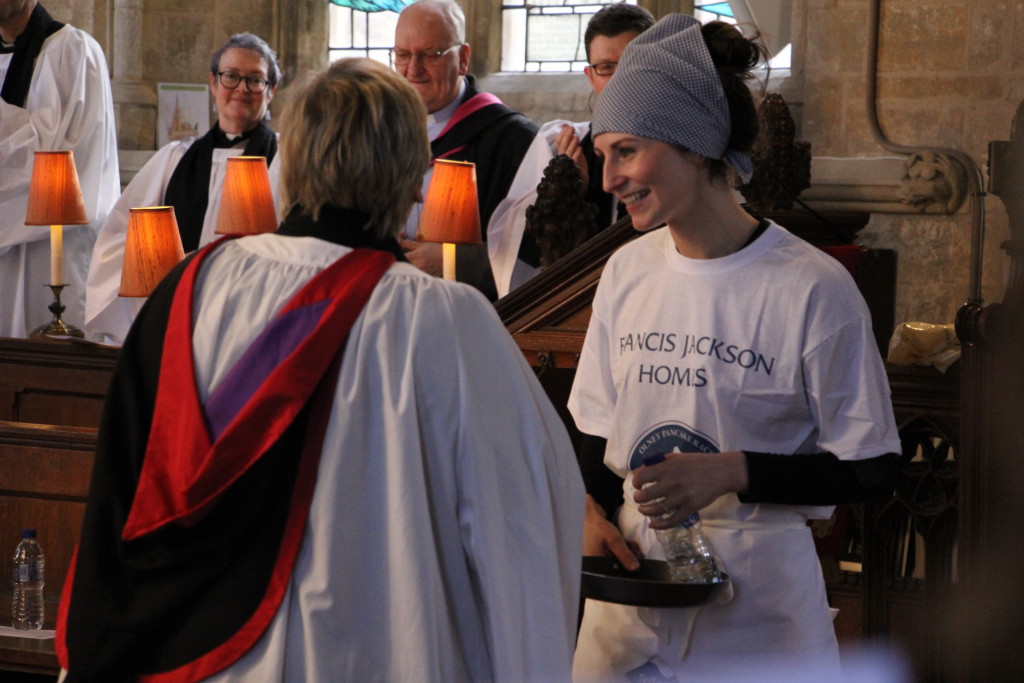 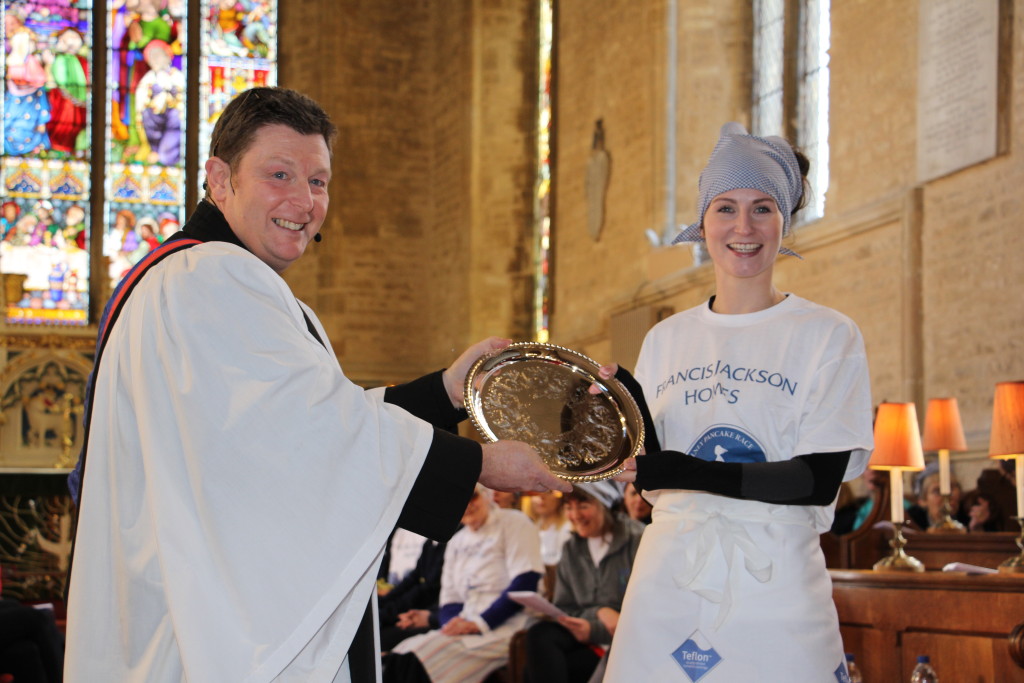 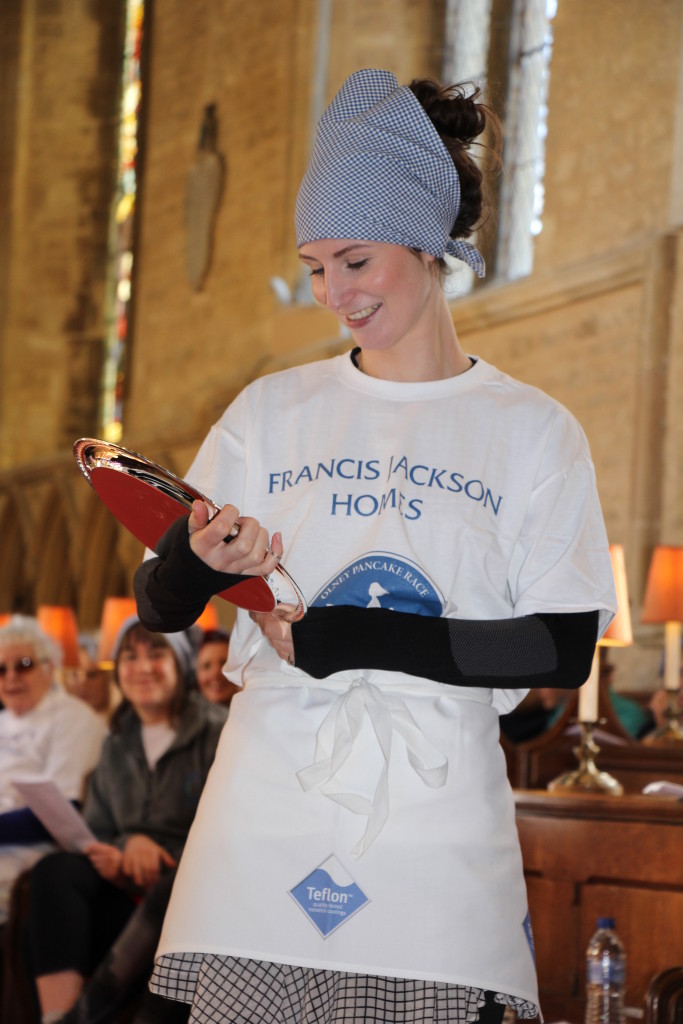